Portland, Oregon, didn’t always have a wildly successful craft brew scene. Someone had to be daring enough to be the pioneers, and the Widmer brothers were just the men for the job. The Widmer Way chronicles Kurt and Rob Widmer’s journey from humble homebrewers to craft beer icons. Alworth also dives deep into Portland’s history, setting the scene for Widmer’s rise in the city now known for its exquisite beer. Drawing from hours of interviews with Kurt and Rob, close family and friends, and big names in the beer industry, The Widmer Way offers an exclusive look into the Widmer brothers’ lives and their enormous impact on craft brewing in Portland and beyond.

Best-selling author Jeff Alworth takes serious beer aficionados on a behind-the-scenes tour of 26 major European and North American breweries that create some of the world’s most classic beers. Learn how the Irish make stout, the secrets of traditional Czech pilsner, and what makes English cask ale unique by delving deep into the specific techniques, equipment, and geographical factors that shape these distinctive styles. Contemporary brewers carrying on their traditions share insider knowledge and 26 original recipes to guide experienced homebrewers in developing your own special versions of each style.

Never in the long history of drinking have beer lovers had it so good, with a brewing renaissance happening around the globe. And never before have beer lovers who also have a thirst for knowledge had it so good—The Beer Bible is a lively, comprehensive, authoritative, and purely fun-to-read guide to beer in all its glory.

The Beer Bible celebrates the pleasure of discovery, for readers new to beer, and the pleasure of connoisseurship, for old hands ever eager for more information. It’s a book built on the premise that the best way to learn about beer isn’t by trying every one out there, but instead pouring your favorite and studying it. That’s what opens the doorway to history, culture, and craft, the influences that make each style of beer unique.

Like bitter, for example. Its origins in the twin discoveries of hops as a spicing agent and modern kilning, which allowed for straw-colored malts. How it took several more centuries to displace the great porter epoch. The influence of mineral-rich Burton water. The Zen simplicity of how bitter is brewed. The quality called “moreish”—a distinctly British adjective extolling the virtue of being pleasant over the course of a full evening at the pub. And the fact that it really needs to be drunk straight from the tap or cask.

To top it off, Jeff Alworth’s ever-engaging style: “British bitters are characterized by a definite hop presence, but they have no violence in them. The hops ride atop a gentle biscuit sweetness and add marmalade and spice.” And so it goes for bocks and lambics, schwarzbiers and Vienna lagers, saisons and Pilsners, weisses, weizens, and witbiers. 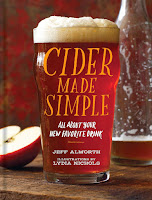 The cider market is currently not large—about one-twentieth the size of craft beer—but it’s doubling every three years.  Cideries are sprouting from Portland, Maine to Portland, Oregon, and acres and acres of cider apples are going into the fields.  It is one of the largest growth markets in alcoholic beverages, appealing to millennials, those who want a low-gluten diet--and anyone looking for a healthy, tasty glass to finish the day.  Although multinational companies are investing heavily in cider, most of the interest is among the small producers.  They follow the craft beer playbook, handcrafting cider in small batches and selling it as a specialty product to connoisseurs who enjoy microdistilled liquor, pinot noir, and IPAs.

As the market matures, consumers will see strange descriptions like Basque-style, West Country, and cidre bouché, and they’re going to want to turn to an authoritative source to explain the differences.  Cider Made Simple explores this wonderful beverage from the inside out—starting from the experience of tasting the cider and working back to how it was made.  The explanations are enlivened by examples from working cideries in England, France, Spain, Canada, and the US, offering a virtual tour of the world, from branch to glass.


Flavor is easy, right? Put something into your mouth, chew or swish, and taste. But what goes into this thing we call flavor? Neuroscientists have identified a whole raft of elements that create flavor, from taste and aroma to the way food feels (we have pressure sensors in our mouth), to things happening in our brains like mood and memories.  Blind tasting is one of the most powerful tools we have to understand beer. Remove those cues given to you by a bottle of beer—the name of the brewery, the style, the cost of the bottle, the design on the label—you are left with only what your senses can tell you.

Everything you need to conduct a tasting is included in The Beer Tasting Toolkit: handy numbered sacks that accommodate everything from a stubby to a 750 ml bottle, tasting notepads, a shorthand guide with key aroma and flavor terms, and a 48-page booklet that describes elements of flavor, beer styles, and how to conduct a tasting. There are tips about which beers to include in your tasting as well as suggestions about pairing your beer with food.
Home
Subscribe to: Posts (Atom)